One key goal of progressive learning is to be able to continually improve upon past performance with the introduction of new data, without forgetting too much of the past tasks. This transfer of information can be evaluated using a generalization of Pearl’s transfer-benefit ratio (TBR) to evaluate the backward direction. As described in Vogelstein, et al. (2020), the backward transfer efficiency of task \(f_n\) for task \(t\) given \(n\) samples is:

If \(BTE^t(f_n) > 1\), the algorithm demonstrates positive backward transfer, i.e. data from the current task has been used to improve performance on past tasks.

Progressive learning in a simple environment can therefore be demonstrated using two simple tasks: Gaussian XOR and Gaussian R-XOR. Here, backward transfer efficiency is the ratio of generalization errors for XOR. These two tasks share the same discriminant boundaries, so learning can be easily transferred between them. However, as we have seen in the original Guassian XOR and Gaussian R-XOR Experiment, backward transfer efficiency can suffer if the new task differs too much from past tasks.

In this experiment, we will try to mitigate the detriment of adding new tasks that are too different by adapting the domain of the new task to the domain of the old task, but maintaining the uniquely sampled distribution of the new task. We acheive this by aligning new tasks to old tasks with an affine point set registration, found through the ICP algorithm described in Besl & McKay (1992). This is a simple yet effective algorithm for affine rigid registration.

This experiment differentiates itself from the CPD experiment, as this approach aligns tasks with label supervision instead of purely aligning distributions in an unsupervised manner.

Gaussian XOR is a two-class classification problem, where…

Gaussian R-XOR has the same distribution as Gaussian XOR, but with the class labels at different degree angle Gaussian R-XOR adapted to XOR will be an unrotated version of the above R-XOR version to match XOR. We will call this adapted XOR or A-XOR for short.

Within the proglearn package, we can make use of the simulations within the sims folder to generate simulated data.

The generate_gaussian_parity function within gaussian_sim.py can be used to create the Gaussian XOR and R-XOR problems. Let’s generate data and plot it to see what these problems look like!

Additionaly, we will be using the ICP algorithm from functions/xor_rxor_with_icp_functions.py to adapt our R-XOR to XOR, producing A-XOR. Observe that the distribution of points matches exatly with the generated R-XOR, except the angle is rotated to match XOR. 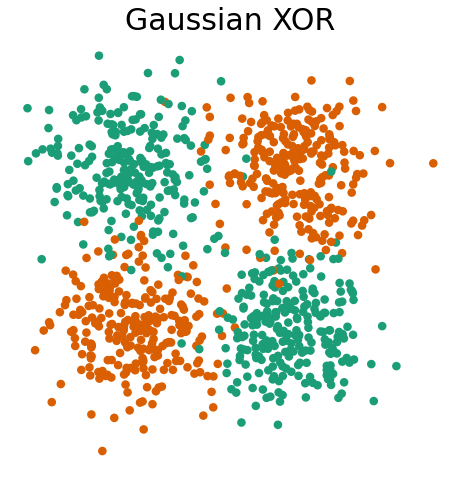 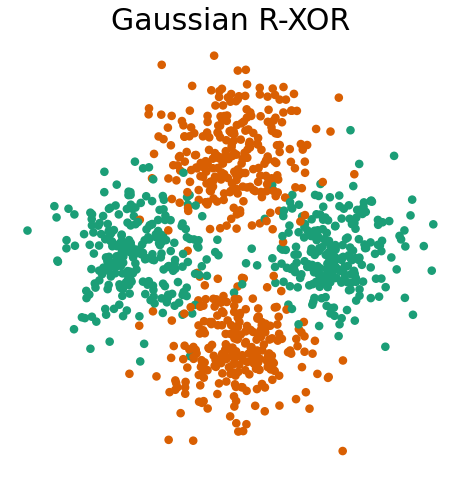 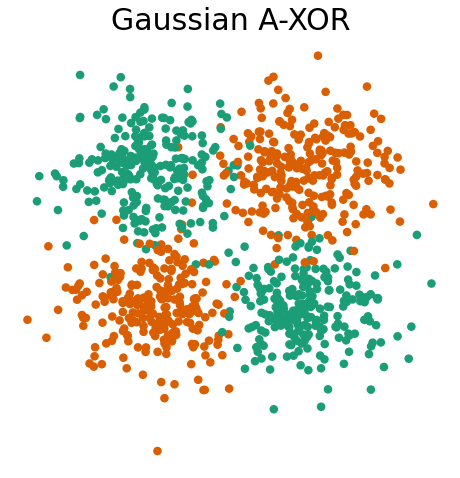 The Experiment (Various Angles vs BTE)¶

Now that we have generated the data, we can prepare to run the experiment. The function for running the experiment, experiment, can be found within functions/xor_rxor_with_icp_functions.py.

First, we will run the classifier with adaptation off:

Next, we will run the classifier with adaptation on: 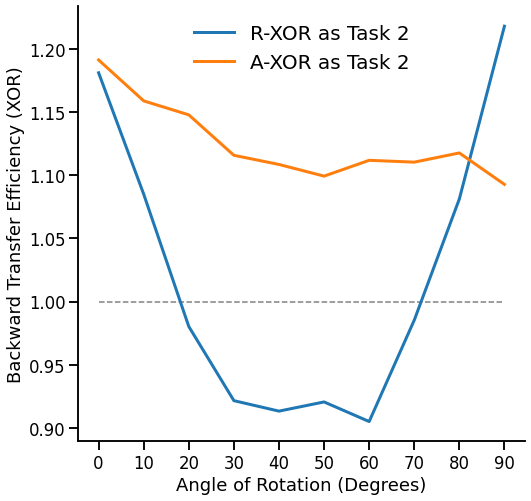