This tutorial provides a walkthrough to applying a Random Forest model to perform scene segmentation on images taken from the International Skin Imaging Collaboration (ISIC) dataset from 2016 using Scikit-Image.

To start this tutorial, we will first import the necessary packages and functions.

Now, we will retrieve images from the ISIC dataset.

Next, we will load all of our images into the workspace. Each image has true annotations where its component pixels are labeled as being part of one of two categories – normal or cancerous tissue. The labels are converted to greyscale as required by the classifier in the subsequent parts of this tutorial.

Having loaded in our dataset, we will now try to familiarize ourself with it. We will choose a sample image from the ISIC dataset to see the original image adjacent to the annotated image.

Having familiarized ourself with the images after some analysis, we will now proceed to perform scene segmentation using Scikit-Image by first training our classifier.

We will next analyze the performance of scikit-image by computing the accuracy. We will do so by comparing the result from scene segmentation to the true annotated image.

Our metrics for measuring accuracy are as follows.

Precision and recall are often presented together as a Precision-Recall curve, as will be done in this tutorial. It is desirable that both values are close to 1.

False splits and false merges are often presented together in one graph, as we will do momentarily. It is desirable for these values to be close to 0.

Dice Score - Sorensen-Dice Coefficient: also known as the dice score, this is a measure of how similar two images are, defined as

Evidently, based on these numerical results, it appears that scikit-image did a good job of scene segmentation, and so we next test it on other images in the dataset.

We will now use this trained classifier to perform scene segmentation on a few other images, looking at the visual output and our measures of accuracy.

Testing the Model on 100 Images

We will know look at the accuracy of the model after performing scene segmentation on 100 images.

Having obtained the predicted scene segmentations on our 100 images, we will now analyze the results in a graphical form. 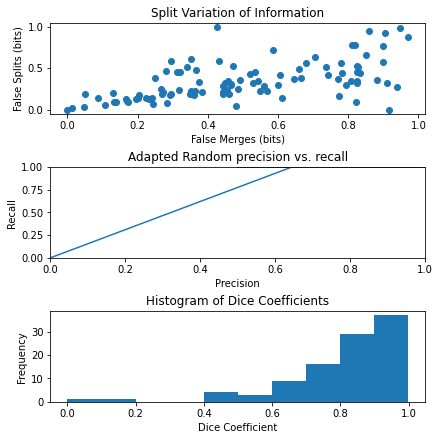