This tutorial provides a walkthrough to applying a Random Forest model based on scikit image to perform scene segmentation on the ADE20K image dataset.

In this first section, we will import our images from the ADE20K dataset.

We will know visualize a few sample images.

We next define a function to flatten the images, as this may help in training our Random Forest and Neural Network models in the future when using Proglearn to ensure the correct dimensionality.

Here we examine what colors in the labelled segmentation images mean.

We discovered in the analysis section that the segmentations are the colors corresponding to the labels, NOT labels themselves. This means that color labels are only relative to the image itself, not the dataset. For example, a tree in image 1 can be pink and a human in image 2 can be pink, but a tree in image 3 is not necessarily pink. We predict models might be performing a more unsupervised approach for dealing with this dataset.

The following attempt below is to map each color value in the segmentations to an integer label in order to simplify model training.

This section is accredited to Amy van Ee

To test other methods of scene segmentation before we attempt an implementation of ProgLearn, we will use scikit-image.

We will choose the image of a palm tree on a beach from the ADE20K dataset to confirm that this method works. 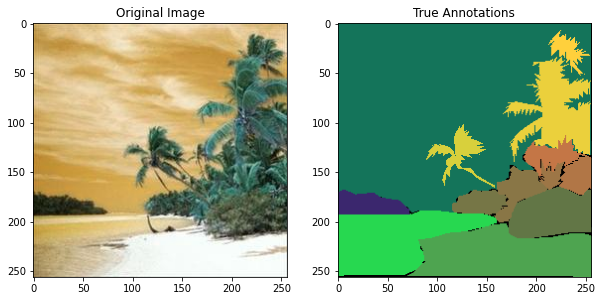 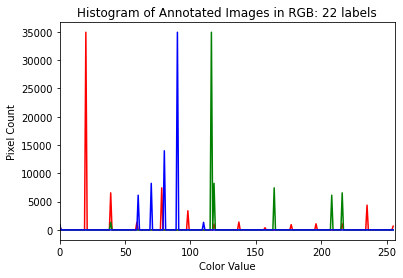 Visualize the Greyscale of the Image

Although the annotated image from the ADE20K dataset has three color channels (RGB) as shown in the histogram above, scikit-image produces an annotated image that has only one. Therefore, in using the provided functions in this package, we will convert to greyscale. 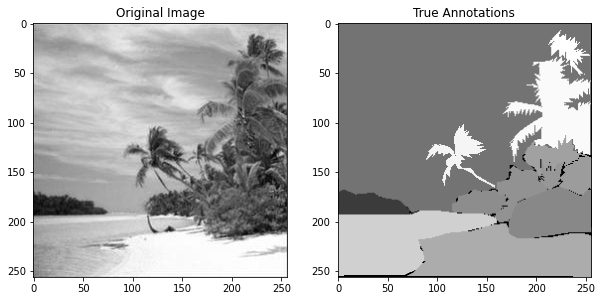 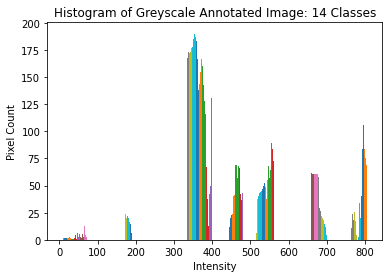 After this prepration and analysis of the images, we will now attempt to perform scene segmentation.

We will next analyze the performance of scikit-image by computing the accuracy. We will do so by comparing the result from scene segmentation and the true annotated image. 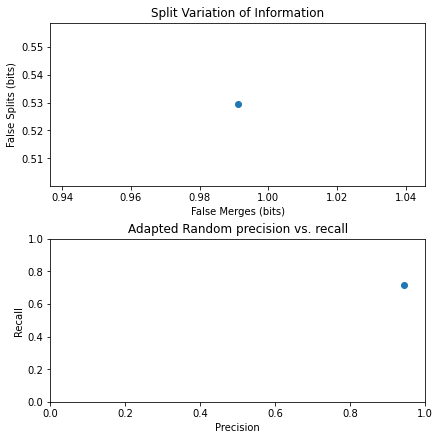 Evidently, it appears that scikit-image did a relatively good job of scene segmentation. Thus, we proceed to apply it to a larger dataset.

Next, we will try to perform scene segmentation on the entire dataset. However, it was found that the ADE20K dataset had some original images and annotated images with differing dimensionalities. Scikit-image, however, requires equivalent dimensionalities of the images to function. Therefore, we selectively chose images whose original and annotated versions had the same dimensions. 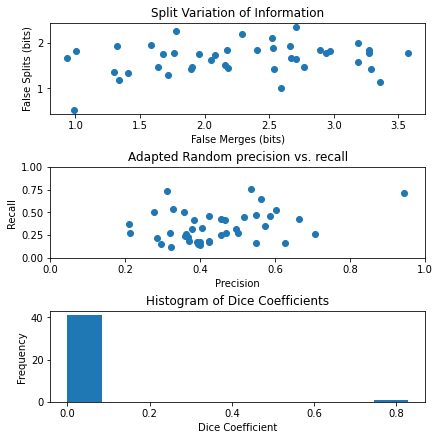 Based on the results, it appears that scikit-image is only able to fit to one specific image at a time, and therefore only the image with the palm tree had high accuracy values, whereas the other images did not.

Looking at a Poorly Segmented Example

This thus presents an opportunity for Proglearn to allow for improved and more generalizable scene segmentation.